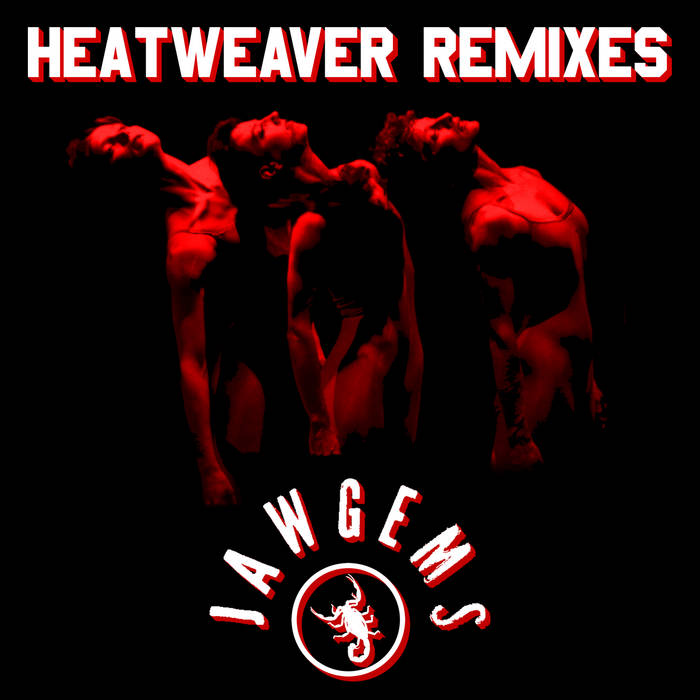 “We put this together with friends, new and old.”

With intertwined melodies and elaborate sample work, the original HEATWEAVER album (released August 2016) is boldly crafted at the convergence of beat music, indie rock, and experimental electronic jams. Its warped sonics and powerful grooves feel incredibly modern, layered with color and soul. On October 13, 2017, Alpha Pup will be re-releasing HEATWEAVER in conjunction with HEATWEAVER Remixes, a full album with guest remixes of each original song, launching an expansive new era for the group.

Old friends, new friends, friends from the road – HEATWEAVER Remixes is stacked with Jaw Gems’ favorite beatmakers. “Some of the tracks were remixed by people we've known since we were kids and other tracks were done by people we've connected with over the past couple years of touring,” relates DJ Moore (drums.)

Some friends are new. Jaw Gems shared a lineup with Milo last summer in Vermont and became instant fans of the rapper. Milo’s unmistakable vocals step along the razor’s edge in “Peace Pipe.” Daedelus remixes the title track “Heatweaver” into a flood of bright colors with a lusciously off-beat sense of vertigo. DJ Moore explains the connection with the maestro: “We were lucky enough to play a couple shows with him this year, and he's helped us out greatly along the way.”

When Jaw Gems started out, one thing that they all had in common was their love for Slum Village; they played tons of SV beats at their weekly restaurant gig for years. T3 (a founding member of Slum Village) gives the treatment to “Ohio,” rapping over the upward-expanding track with a fresh dose of face slap.

Jaw Gems connected with THE GRID’s A.J. Hall at Jazz Fest this past year in New Orleans, becoming fast friends with the monster drummer, bassist and producer who is an integral part of Nola’s Jon Cleary Band. THE GRID’s trance-inducing touch can be felt on the remixes of “Side King (A)” and “Rvil.” And it was this new friend who inspired the remix collection. After receiving the stems to the original HEATWEAVER album, THE GRID sent back his dreamy, dirty flip of “Davinci” – which kicked off the whole remix album process.

Some friends have been found throughout years of touring. Break Science’s drummer Adam Deitch has been a long-time fan of Jaw Gems, taking them under his wing. The “Side King (B)” remix by Break Science breathlessly balances the line between beauty and aggression with agility and finesse. Heart-squeezing bass lines bolt through the remix of “Lead Sister,” a well-paced rubdown between wild explosions and utter peacefulness by Brady Watt (bassist for DJ Premiere and Talib Kweli). The “Beachkeeper” flip by The Russ Liquid Test is a swirly, syrupy flight through open skies.

Some friends go way back. Both from Portland, Maine, Jaw Gems and GOD.DAMN.CHAN have been friends since it all began. GOD.DAMN.CHAN contributes three remixes to the collection, starting with the light-footed fire and melted bass of intro track “Sap Flow.” “How Could Yu B This Cold” stretches free into space and “Studded” closes the album with a psychedelic stomp, a lifted send-off that leaves the listener floating.

Jaw Gems’ keyboardist Kafari grew up in Cincinnati with Blakhi and Pink Siifu (half of B. Cool-Aid). Step into the smoke of “Party Slave” and feel Pink Siifu’s hypnotic cadence create a haze in your brain. A free-seeking guitar roams through velvet fields of synthetic sound in Blakhi’s version of “Born God.” fyvr was the only person who came to see Jaw Gem’s first show in New York that wasn’t one of their friends. His remix of “Worship” is meditative and evolving, an enigmatic rush of haunted emotion.

Lean back and listen. HEATWEAVER Remixes will be released on Friday, October 13th on CD, cassette, and digital formats, in conjunction with the re-release of the original HEATWEAVER album. Grab the stacked bundle and get ready to experience Jaw Gems live this fall. Their national headline tour begins at Low End Theory on September 27 and will go on to hit acclaimed venues including The Fox Theatre in Boulder, CO and Mercury Lounge in New York City. Jaw Gems will also be playing various support sets with Thriftworks, ProbCause and the Disco Biscuits.

Bandcamp Daily  your guide to the world of Bandcamp

outré black metal, with a Victory Over the Sun interview and music from Liturgy and Jute Gyte.